Classical Hodgkin Lymphoma (CHL) is a tumour of activated B-cells that have lost most of the immunophenotypic characteristics of their normal counterparts. A defining characteristic of CHL is the tumour cells often constitute a minority of the volume of the tissue mass, which consists mainly of normal haemopoietic cells and fibrous tissue.

The term classical is used to make a distinction from nodular lymphocyte predominant Hodgkin Lymphoma which is biologically and clinically distinct. 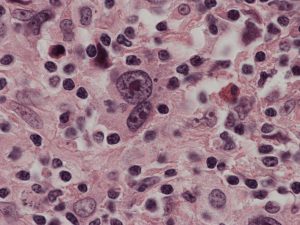 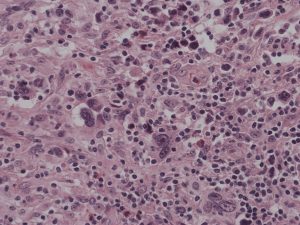 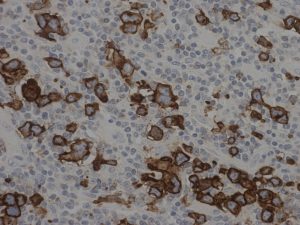 About 75% of patients treated with standard chemotherapy, and radiotherapy where indicated, are cured of their disease and survive for more than 5 years. Many of those who relapse can still be effectively treated.

Age is an important prognostic factor and data on the outcome of older patients is limited. The Hasenclever index is the standard method of assessing prognosis at presentation.

PET scans are used to assess response to chemotherapy and using this data to modify subsequent treatment is being evaluated in clinical trials.