The invention of the polymerase chain reaction (PCR) is one of the most important developments in biology in the twentieth century. The technique allow for the rapid amplification of pre-defined DNA sequences present at low abundance in samples of cells to a level where they can be readily analysed. PCR based methods have many applications in investigation of haematological malignancy including the detection of genetic abnormalities in tumour cells, the study of patterns of gene expression and the detection of monoclonal lymphocyte populations.

Mutations of specific genes are a feature of many types of haematological malignancy. These may be characteristic of a particular subtype or be a factor in determining prognosis. If the mutation always occurs at a single point this can readily be detected designing a PCR reaction that will only amplify copies of the mutated gene. The commonest example is the detection of the JAK2 V614F which is the diagnosis of chronic myeloproliferative neoplasms. Where different mutations may be found within the same gene the sequence of one or more PCR products need to be determined using an automated sequencer and comparing the sequence obtained with that found in normal cells using the extensive on-line resources now available. 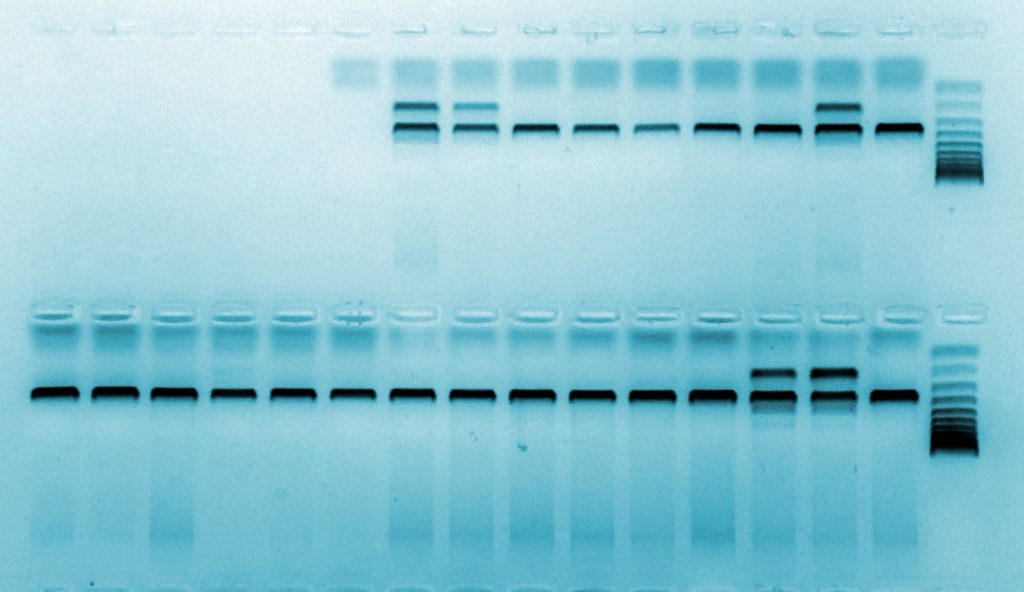 In many types of leukaemia and lymphoma abnormal gene expression occurs when genetic material is exchanged between chromosomes leading to a breakdown of the regulation of a critically important gene such BCL2 in follicular lymphoma containing the t(14;18) translocations. PCR reactions can be designed using primers against sequences on each of the contributing chromosomes. Ampification will only take place if these sequences are brought into close proximity by the presence of a translocation.

The expression of a particular gene can be detected by detection of the mRNA produced when the gene is transcribed. The enzyme reverse transcriptase is used to make a DNA copy of the mRNA which can then be analysed using PCR. An important application of this technique is the detection of fusion genes these result from translocations and produce a novel protein from parts of two separate genes which have been brought together. A example is the BCR-ABL fusion protein which is required for the diagnosis of chronic myeloid leukaemia. Inhibiting the effects of this abnormal protein is the basis of the highly successful treatment of this condition.

A modification of the PCR reaction allows the number of mRNA molecules in the sample to be measured. This is now used routinely in monitoring the response to treatment and the early detection of relapse in a number of types of leukaemia where a suitable target exists.

All forms of cancer are derived from a single cell which has acquired a number of generic abnormalities. During their normal development T and B- lymphocytes rearranged and mutate the genes coding for the T-cell receptor and immunoglobulin molecules. This is mechanism which allows the immune system to respond to a huge range of infections and foreign proteins and results in each individual cell having a unique genetic signature. In a lymphoid malignancy derived from a single T or B cell, all of the cells will share the same signature (a monoclonal population). A number of PCR methods are available to detect monoclonalty as part of routine diagnosis. Highly sensitive techniques are available to monitor response to treatment of patients received chemotherapy for acute lymphoblastic leukaemia.

Sequencing technology is advancing very rapidly and systems now becoming available allow the simultaneous analysis of a large number of genes. This can be used to detect mutated or translocated genes in a tumour sample and as a quantitative measure of patterns gene expression. The catalogue of genetic abnormalities found in cancer is growing on an almost daily basis and this is complemented by information on the patterns of gene expression that results from these abnormalities. As technology continues to improve and prices fall it is very likely the sequencing based diagnostic will become the central component in the diagnosis of haematological malignancies within a decade. This is a crucial component in the move to stratified and personalised medicine.